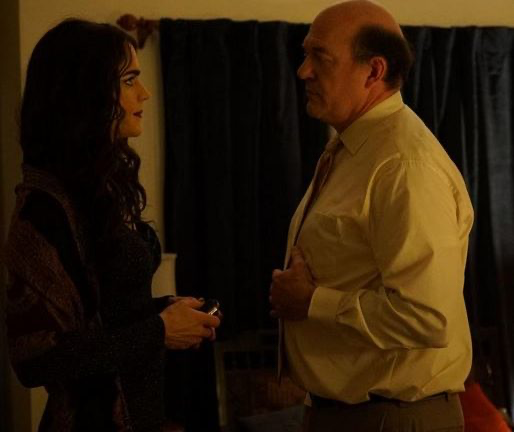 San Diego’s annual LGBT film festival ended with the trans-themed film Anything. Director Timothy McNeil and Associate Producer Kylene Steele made a special guest appearance at the Observatory Theatre to discuss the film and take questions from the audience.

The film was preceded by the short feature Mrs. McCutcheon from Australia. It’s a heartwarming story about a 10 year old who finds challenges but support in the struggle for self realization and acceptance. http://mrsmccutcheonthemovie.com/

In Anything, Early Landry (John Carroll Lynch) has lost his wife of 26 years in a car accident and has become suicidal. He moves to Los Angeles to live with his sister Laurette (Maura Tierney). To escape her suffocating attempts to control his life, he moves into a working class Hollywood apartment complex.There, he meets a number of marginal and struggling people, including sex worker Freda Von Rhenburg (Matt Bomer). They bond over their own wounded lives, and his old-fashioned courtesies and her hardbitten realities strangely complement each other. The film’s premise, that a straitlaced middle-aged widower from Mississippi and a transwoman sex worker in Los Angeles can find commonalities and affection, is both timely and timeless.

The film, adapted from McNeil’s stage play into a feature film, has generated controversy. A number of transactivists have decried the films casting of a cisgender male instead a transwoman in the central role of Freda. It may be recalled that the similar controversies followed Felicity Huffman’s Bree in Transamerica, Jared Leto’s Rayon in The Dallas Buyers Club and Eddie Redmayne’s Lili Elbe in The Danish Girl.

During the question and answer session after the film’s conclusion, McNeil acknowledged the controversy, but saw it as something positive if it sparks a dialogue about transgender characters in cinema. He noted the importance of casting in his job as director, and felt he had made the right choice with Matt Bomer.

Kylene Steele, herself a transwoman, admitted to being taken aback by some of the intense negativity on facebook and twitter, as well as calls for a boycott. She felt this criticism was unfairly directed against community allies. She also stressed the need for greater accountability in the transgender community: for people to inform themselves better before making judgments, and not abuse the anonymity of the web to launch damaging attacks.

One audience member noted how Early and Freda helped each others substance dependencies and made the memorable observation “The opposite of addiction is connection”. Yet another noted how it wasn’t so much a gay or straight or even trans love story, but of one wounded soul to another. And finally, one person asked if there was a sequel planned. Director McNeil quipped “Maybe a musical!”