Neutral Corner President Honored as Veteran of the Year 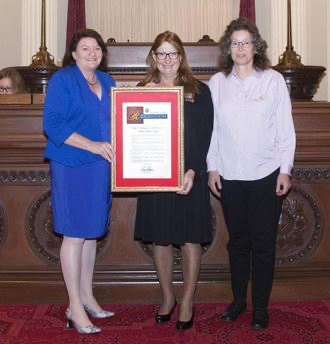 Neutral Corner President Veronica Zerrer was named as Senator Toni Atkins’ “Veteran of the Year” for the 39th District, in a ceremony June 20th, in the State Capitol Sacramento.

At the ceremony, San Diego’s State Senator and President Pro Tempore Toni Atkins said “Veronica served our country as a member of the Armed Forces for more than 20 years, and when she retired from active duty, she continued to serve her country – by serving her community…Today she does so by providing support for her transgender neighbors. Veronica embodies the principles of honor, duty and service, and I am proud to name her Veteran of the Year.”

Veronica served as a Cryptology Technician in the US Navy. Later, she served as a Platoon Leader, Company Commander and staff officer in the US Army’s 1st Infantry and 35th Infantry Divisions. She retired with the rank of Major in 1998. She worked as the Tribal Grant Writer for the Prairie Band Potawatomi Nation, managed a homeless shelter in Kansas, and later served as  Director of Development for the Orange County LGBT Community Center. After relocating to San Diego, she became president of the Neutral Corner Inc, and also serves on the board of TransFamily Support Services. In 2016 she received the Building Bridges award at the annual Trans Day of Empowerment, and later was inscribed on the Benjamin F. Dillingham, III & Bridget Wilson LGBT Veterans Wall of Honor.

“I’m very grateful, and humbled, to be honored in such a manner by Senator Atkins,” Zerrer said. “Her commitment to our nation’s military personnel in California comes from the heart. She’s a tremendous supporter of California veterans, for which so many are grateful.”