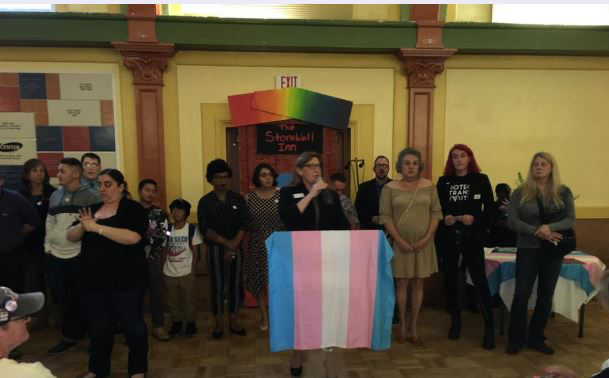 The 16th Annual Transgender Day of Empowerment (TDOE)  was held on April 5th at the Hillcrest LGBT Center. It focused on the key ingredients to Trans Empowerment of Scholarships, Employment, and Public Service.

Academic study is always an event centerpiece, when the Tracie Jada O’Brien scholarships are awarded. Organizer Sarafina Scapicchio noted that in the last few years, 67 scholarships totaling $33,500 were given. This year, 22 transyouth received scholarships to continue their studies in such fields as chemistry, language arts, nursing, psychology, and history.

Employment for transpeople can be hard if not impossible to find. Even when found, workplace conditions can be difficult and threatening.  Keynote speaker Michaela Mendelsohn spoke on how “Financial security empowers us all” and current efforts to help transpeople find stable and rewarding work. Michaela is herself a transwoman who transitioned later in life. She opened her company’s El Pollo Loco restaurant in 1988, later owned and operated 17 franchises, and served for nine years as president of the El Pollo Loco Franchise Association. She founded the group Trans Can Work (www.transcanwork.org). This nonprofit organization trains business in the hiring of transworkers and related issues, as well as programs for jobseekers themselves. She noted that at a recent Trans Job Fair held in Los Angeles, there were 76 employers and 500 job seekers, 200 interviews and 40-50 hirings.

Community Service is another path to empowerment. Neutral Corner President Veronica Zerrer and Military Veteran TJ Seguine presented a special recognition for transmen and women in our armed forces. Veronica said “ I have had the privilege to get to know, and work with many of the sailors, soldiers, airmen, marines, and coastguardsmen you will soon meet…Know that this roomful of citizens, retirees, and veterans will not rest until this [current transmilitary] ban is overcome. And for those ROTC cadets in the room tonight, know this: That there will come the day when you too will take that oath of allegiance to the Constitution of the United States.” In addition, trans-community service awards were presented: Angelle M Maua earned the Building Bridges award for starting a support group for parents of color. M. Valladolid received the Satin Styles Youth Award for serving as a role model to other youth. Van Ethan Levy, who works as a mental health clinician, was given the Community Service Award.

The event is held yearly in April, and as the event brochure sums it up: “Day of empowerment is a community event that amplifies voices and creates confidence within the transgender community”.