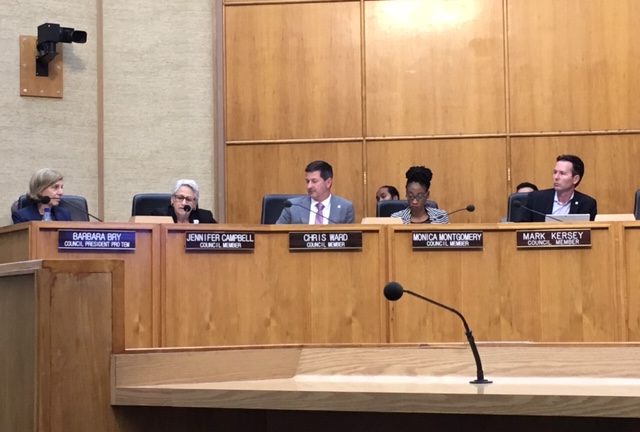 It was the culmination of over a year’s effort to get the resolution on the city docket. Zerrer led an effort to mobilize support from the Community Leadership Council in the spring of 2018 in which that body of LGBT serving organizations voted overwhelmingly to condemn the ban on Transgender troops. “We wanted to see if the updated policy on Trans troops would actually go into effect.” Zerrer said in a telephone interview when asked why the resolution was not initiated sooner. “When it did go into effect in April of this year we decided we needed to act. Initiating action [on a resolution] any earlier would have been wasted if the courts had stopped the ban from taking effect.” Zerrer said there was definitely a collaborative spirit last April when other community members reached out to their Councilmembers.

Chris Ward representing San Diego’s District Three sponsored the Resolution calling Zerrer and another veteran, Tristan Sotomayor, to testify and conduct a short presentation on the effects of a ban on open service by trans men and women.

The outcome of the vote? It passed with all Council members voting for it, except for two. The lone dissenting vote came from Scott Sherman of District Seven who explained he never votes for resolutions aimed at Federal or State policy. Chris Cate of District Six left the meeting early and did not vote.

Many from the trans and gender non-binary community spoke in favor of the resolution.