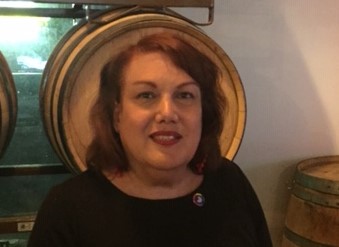 On November 7, 2019 at the San Diego LGBT Center Ruby Sola will be inducted onto the Wall of Honor along with seven other veterans honored for their military service to the country despite policies that prohibited, and persecuted them for serving.

She served aboard the submarine tender USS Howard W. Gilmore, and destroyer USS Claude V. Ricketts. Serving during the late 1970s no one could be gay, let alone transgender and pursue her true gender identity.

Upon her discharge in Norfolk, Virginia Ruby relocated to San Diego where she volunteered with the San Diego Aids project in the 1980s. She was instrumental in facilitating some of the first safe sex classes at the AIDS Project, and at the Unitarian Universalist Church. She worked front and back offices with Doctor Brad Truax, one of the first doctors to address the AIDS crisis. She collaborated with a local Pharmacist, Joy Galloway, ensuring medications were covered for patients. She did street outreach for the San Diego AIDS Project. She was the Peer Advocate/Events Coordinator for ‘Being Alive.’ She was a charter member of the Trans Latina group Transgenero 2000 San Diego’s first support group for Trans monolingual and undocumented Trans women which celebrates its twentieth anniversary in 2020 and which continues meeting at The Center. Indeed, she remains active by advocating for the development of the North Park Senior Apartments, San Diego’s first LGBT affirming senior housing complex. All of this was accomplished with a never-ending optimism in the promise of herself, her community, and her country.

Ruby prefers leading by example as well as working behind the headlines for the community. She serves as a positive role model and remains, one of San Diego’s local heroes for all of the contributions she has made to the transgender community.