What Happened at the NCTE?

A substantial reduction in staff at the NCTE was reported last week. In dramatic fashion over a dozen staff members left abruptly citing reasons that ranged from failure to unionize the workforce to complaints of racism. In an open letter to OUT magazine the former employees cited that they were all “dedicated to improving the lives of transgender people nationwide through the lens of racial and economic justice…”. The same letter goes on to state that the leadership of NCTE did not share that dedication.

Detailing their reasons for leaving, the former staff members say that the executive team hold “an inconsistent and irreconcilable view of how to make the organization itself a strong social justice movement – including recognition of a union and steps needed to ensure NCTE itself is an equitable place for people of color, people with disabilities, and other marginalized members of the transgender community.”

The letter’s most insightful passage comes six paragraphs down. Accusing NCTE of a “failure to retain the appropriate level of diversity in the organization – combined with a shifting cultural and political landscape for the trans rights movement…” some staff members called for the Founding Executive Director, Mara Keisling, and Deputy Executive Director Lisa Mottet, to “put forward a timeline for their own exit.”

A wholesale departure of staff is not a disaster for NCTE. The optics may look bad but consider the May 7, 2019 NCTE Policy Department release of a report entitled “Failing to Protect and Serve: Police Policies Towards Transgender People.” One of the police departments “failed” was San Diego’s. The grade and report’s findings for San Diego were inaccurate (see Neutral Corner’s blog of May 11). If the report was inaccurate here where else were findings mistaken? The methodology used by the Policy Department at NCTE appeared unthorough, and questionable. If the staff who left were responsible for such a poor product then it can be argued it is for the best. Progress for the transgender community depends upon competent advocacy work.

The full letter can be found here: https://www.out.com/transgender/2019/11/15/why-we-left-americas-largest-trans-advocacy-organization 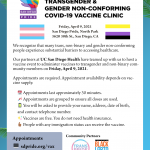 Get your COVID 19 Vaccination Here