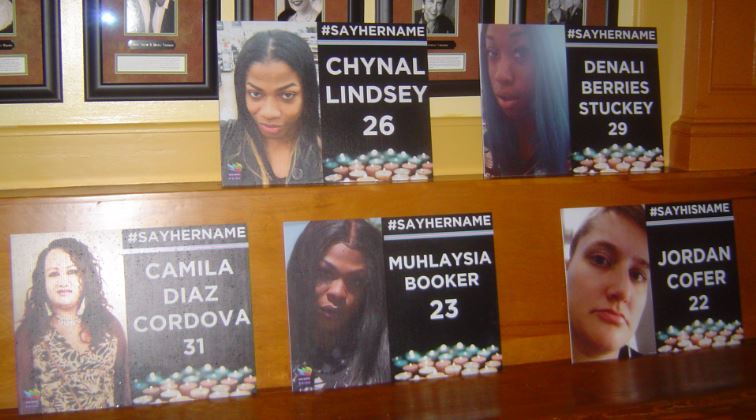 San Diego’s annual Transgender Day of Remembrance took place on November 20th at the LGBT Center in Hillcrest. The event mourned losses, celebrated lives, and offered a message of community love and resiliency.

Despite the intermittent rain, many participated in a candle-lit vigil march through Hillcrest, with some carrying placards bearing the images of transmen and transwomen murdered this past year. A special commemoration book also featured their photographs, with names and death details. The statistics, as always, are grim: In this past year, there have been 331 trans and gender diverse slayings, including 30 in the United States, 63 in Mexico, and 130 in Brazil.

The event was moderated by Naya Marie Velazco, the Center’s new Transgender Services Coordinator. She noted the importance of the yearly event, and said “We will not be erased, our stories will be told, and they will be heard”.

Pamuela Halliwell, marriage and family therapist, reminded the audience that the abuse of transpeople did not stop with their deaths but continued afterwards as well. They were misgendered in police reports and social media, their birth names were used rather than their chosen gender name (deadnaming), and some were even buried under that same incorrect name. Pamuela says “We need to take a stand, that we have to be identified correctly, to show we exist”.

Angelle Malaika Maua of the Gender Phluid Collective, an LGBTQ support group for people of color, spoke as the parent of a trans teen. She said that as a parent/ally, she would continue to be a voice to empower and lift the community, and added “Thank you for being you, thank you for being resilient”.

Amber St James, educator and community promoter, noted the sorrowful nature of the event but also the need to embrace joy. “We are here to celebrate these peoples lives. They had names, families, and power… Part of joy is action, being able to mobilize, to create the change. Be daring enough to live life in the face of oppression. In the words of the amazing Miss Major, “I’m still fucking here!”

Ruby Phillips, Navy veteran and activist, spoke of her own personal experiences of adversity, and how it can empower. “Adversity can make you or break you, if you let it. The choice is yours…Strength doesn’t come from what you do, but by overcoming what you thought you couldn’t do…Go out there and make the ending to your story”.

In a special commemoration, the auditorium’s large screen showed pictures of the slain. Volunteers read their names and ages, and the audience was asked to repeat their names. Special guests at the event included Toni Duran, District Representative for Senate President pro Tempore Toni Atkins and Haley Lesser, Legislative Assistant for City Council President Georgette Gomez.

In closing, Deja Cabrera, another trans-services organizer at the Center, said “Take care of yourselves. Take care of your transgender loved ones. Hug them extra tight this evening”.