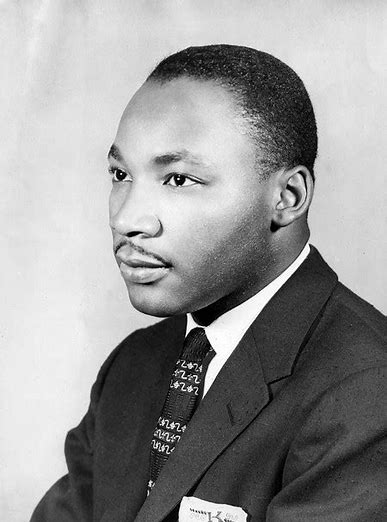 Martin Luther King ranks among the great Americans in our history. He fulfilled the victory of the Civil War through his life’s work and his writings. Because of him Jim Crow was ultimately defeated. In his example I found hope and encouragement, for myself, my family and my country. He also put his faith in America. That’s right, faith in America. He challenged us to claim the birthright made to all Americans by laying claim to the promises made in the Constitution. Promises that are there for all our people.

What affected me the most about Reverend King were the values he promoted: self-determination, resiliency, honesty, accountability, integrity, and honor. Values that sounded so familiar to me, because I was raised the same way. Family values, one and all.

He stood up to racism as many of us have to stand up to discrimination. No one would doubt that racism, fear, and hate still exist in either repressed or expressed ways. These are evils that takes public form when people think they can get away with it, and lately many think they can. Reverend King took on evil by appealing to the American conscience. He asked ‘are we not better than this?’ Even today his words challenge us to live up to promises made at the nation’s founding. He advocated taking the future into your own hands by asking a simple question in a highly public manner, “America, you promise freedom, and equality of opportunity, are we not worthy of it?”

He was, and remains an inspirational role model for transgender Americans. Read ‘Letter From Birmingham Jail’, and one can readily see the best of America. Instead of wanting to tear down the system he says that those black men and women who sat down at lunch counters were instead fulfilling America’s promise. As he wrote, “One day the South will know that when these disinherited children of God sat down at lunch counters, they were in reality standing up for what is best in the American dream and for the most sacred values in our Judeo-Christian heritage, thereby bringing our nation back to those great wells of democracy which were dug deep by the founding fathers in their formulation of the Constitution and the Declaration of Independence.”

Give me a draught from that great well. Reverend King was able to link these promises to the insistence of black Americans that they are equal in American society. Despite the legacy of slavery, and Jim Crow America’s promise is not out of reach. It was not out of reach then and it is not today. It will take effort. It will take courage, honor, and a great deal of resiliency. Reverend King’s message reminds us of the founder’s promissory note to future generations. In so doing he reseeded the American conscience with the idea of equality. Such reseeding is needed from time to time from the abolitionist movement through to the Civil War, to the Civil Rights Movement to today. We reseed the notion of equity. Which is at the heart of the American conscience.